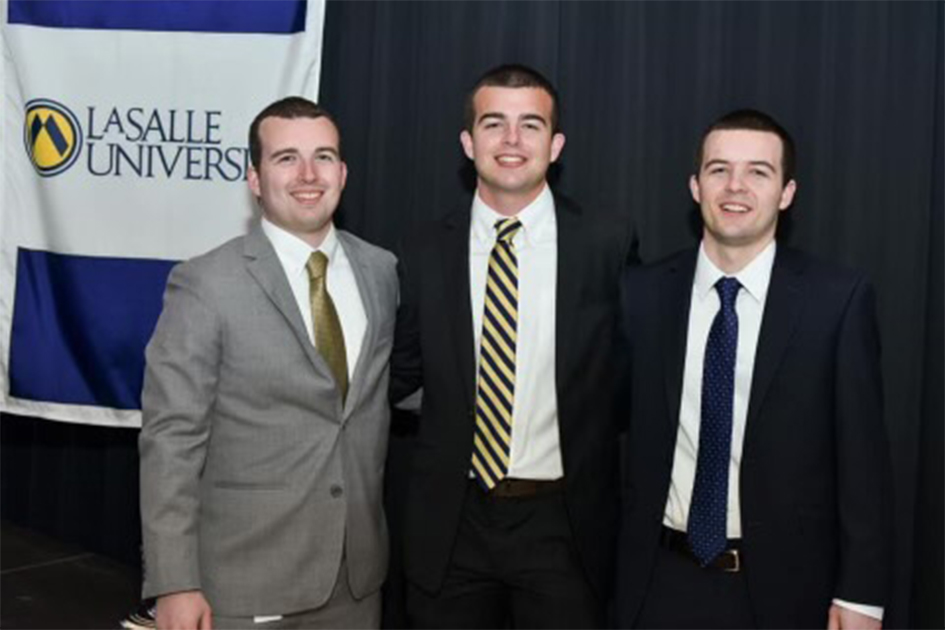 It is a family affair for a trio of brothers, passed from La Salle to the 4 big accounting firms.

When Ryan Scott, MBA ’21, envisioned La Salle University’s 4-year BS / MBA in Accounting program, the only such program in the Philadelphia area, he didn’t have to look far to find examples of success.

His older brothers, Joseph, MBA ’16, and Patrick, MBA ’19, were graduates of the program, a distinction that helped them, in part, to land positions with the Big 4 PricewaterhouseCoopers (PwC) accounting firm.

Ryan followed in his brothers’ footsteps, feeling the program could provide him with an equally clear academic path to his professional goal of becoming a Chartered Accountant (CPA) like his father, Joseph. And just like his brothers, Ryan enjoyed similar success at La Salle and landed a Big 4 job offer.

â€œThe success of my brothers certainly played a big part in my decision to attend La Salle and be part of the 4-year BS / MBA program,â€ said Ryan, an audit partner at KPMG. â€œI was very impressed that both of them had full time jobs at a large accounting firm at the end of their junior years. I felt that if I worked hard like them, the program would put me in a similar situation, which it ultimately did.

Like many students, the Scott brothers cited the possibility of earning an MBA in four years as one of the most attractive elements of the program. With a condensed schedule, students in La Salle’s BS / MBA program benefit from pursuing their MBA without having to balance their commitments as professionals.

The brothers, originally from Warrington, Pa., Believe the program’s rigorous curriculum and accounting school experience has better equipped them for a smooth transition from the classroom to the professional world.

Patrick, an experienced assurance partner at PwC, drew on his brother Joseph’s experience in the program. (Today, after a stint at a Big 4 company, Joseph is assistant vice president of financial reporting at William Penn Bank.) Patrick highlighted focused lessons from professors like Susan Borkowski, Ph.D., and Andrew Lafond, DBA, CPA, for having prepared him for both professional situations and the CPA exam.

â€œThere aren’t many similar programs in the area, and I would highly recommend it to anyone in high school who is considering majoring in accounting,â€ Ryan Scott, MBA ’21.

â€œProf. Borkowski’s Government and Nonprofit Accounting Course helped introduce important nonprofit accounting concepts that provided an excellent foundation when providing insurance deliverables to nonprofit clients of PwC, â€said Patrick. â€œThe advanced courses in taxation given by Professor Lafond have allowed me to deepen my knowledge of accounting concepts related to taxation and best practices in tax research, which made the subjects addressed in the Regulation section of the much more familiar CPA exam.

With three brothers studying in the same program, there was understandably friendly competition, which was nothing new, according to Ryan.

â€œThere are bragging rights among us as to who was the best student,â€ Ryan said. â€œWe all played the same sport growing up and we were very competitive with each other and constantly comparing our performance. My brothers have set the bar high. And since I’m so competitive and want to do better than them, that has definitely played a role in my success. “

As competitive as they are, the Scott brothers have also supported each other. Being the youngest, Ryan said he learned a lot from Joseph and Patrick’s experiences.

â€œMy brothers gave me a ton of advice on my career path,â€ Ryan said. â€œThey had told me stories about what it was like to work at a big accounting firm, so I knew what to expect and I was ready when I started working (at KPMG). They also really helped me find the best strategies for the CPA exam, which I will be taking this summer.

â€œThe 4-year BS / MBA in Accounting program is a great way to start your career if you are an aspiring CPA,â€ Ryan said. “There aren’t many similar programs in the area, and I would highly recommend it to anyone in high school who is considering majoring in accounting.”

A look at the Olympians who have come of age