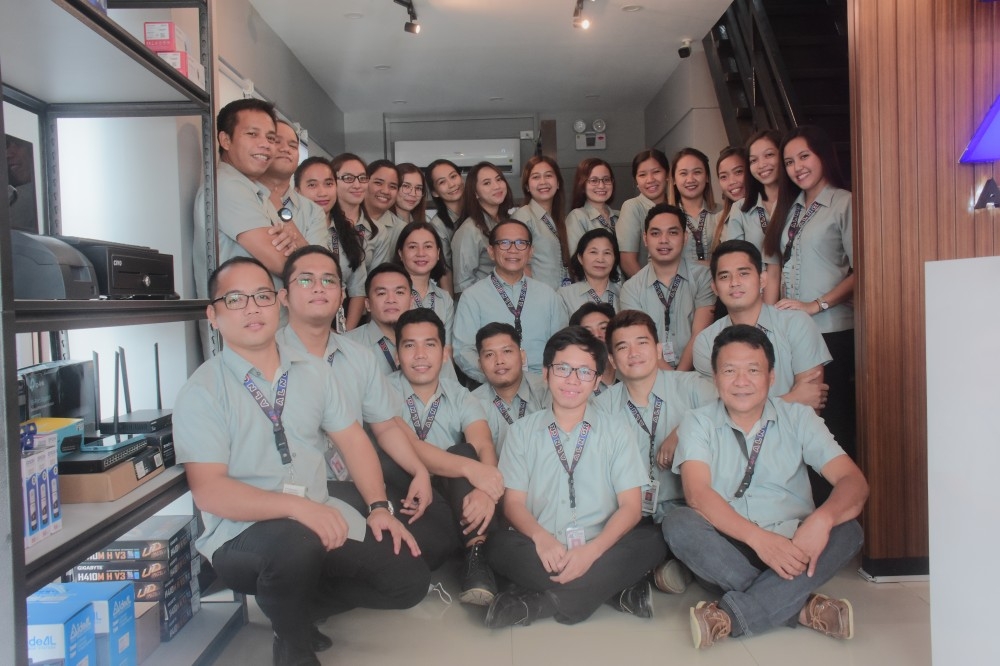 The men and women behind the success of AL Navarro Accounting Services. Photo by Ralph Lawrence Llemit

“Aldwin was a hardworking and dedicated employee. He delivered more than was expected of him and he did not count the service he rendered to the company; he did not count the hours and he was eager to learn. That’s why I knew from the very beginning that this man will be successful in any endeavor he wants to pursue. To you Aldwin and AL Navarro Accounting Services, congratulations!” — Orlando P. Carvajal, business mentor to Aldwin L. Navarro

A business anchored by the knowledge, perseverance and trust of its owner will certainly go a long way. This has been proven time and time again by thousands of successful companies and businesses including AL Navarro Accounting Services.

Founded and registered by STI and Holy Cross of Davao College graduate Aldwin L. Navarro in 2000, the accounting services firm initially catered to only a handful of clients. But thanks to word of mouth and the trust of those same customers, AL Navarro’s customer base has grown unprecedentedly, which now includes large national companies.

Before the accounting services firm became what it is today, Aldwin recalled that while he was a third-year accounting student at Holy Cross of Davao College, he also dabbled in programming and to the development of ITS systems. He recalled that it was his parents who pushed him to be in accounting, but his passion is to study computer programming. So when his parents were able to earn enough money to enroll him in the class he loved, he easily seized the opportunity.

Aldwin only took his accounting course for three and a half years and immediately after graduation he got a job. But he also dabbled in accounting services as he loves systems and programming, taking on one client at a time while being employed. Since he couldn’t see himself as an employee for the rest of his life, other than as his clients increased in number, he chose to focus on accepting bookkeeping services and resigned his job. use. His love for systems and programming also came in handy because at that time it was the start of the digital revolution where companies were starting to digitize or computerize their data.

Aldwin decided to officially register his business with the Bureau of Internal Revenue (BIR) and he acted as a one-man army for his own business, selling his services on the ground floor of the BIR, distributing his cards appeal to anyone who enters the Office.

Fast forward to now, AL Navarro Accounting Services not only grows its clients but also its employees, all of whom consider the company their second home and family. Once operating from home, the company now has its own office in Lanang, Davao City.

For Jimmy Ballesteros Jr., outside accounting supervisor, he said working at the company is like being at a second home where everyone is treated like family.

Victor Timtim Jr., Head of Tax Advisory and Compliance Services (TACS), reiterated Ballesteros’ testimony, adding that what drove him to stay with the company for seven years was his great concern for the mental well-being of employees.

Meanwhile, the company’s director of business processing (BP), Emilio Decinilla Jr., said working at a company that gives more than what employees are legally entitled to receive is a important factor in the quality of service that employees provide to their customers. .

AL Navarro Accounting Services commemorated its 20th anniversary two years ago, but due to restrictions imposed due to Covid-19, its management and employees were unable to celebrate it in a grand way.

In March this year, the accounting services firm obtained its ISO-2005 certification, proof that the company has come a long, long way.

Aldwin, in an interview, said the company didn’t apply for certification just to be called “an ISO-certified company.”

“I really have a goal that we wanted to be ISO certified. Number 1 is to remind us that everyone has to follow a system. Whatever guidelines we have set for our quality management system that we we are committed to doing as an international standard they must be met,” said Aldwin.

This, he said, will ensure the sustainability of the business even after the founder has long since retired, as the system is already in place.

Meanwhile, mom. Lucy Agnes Erguerro, Human Resources Manager, said that since ISO certification is an “open-ended achievement” because the company must maintain it through an annual assessment by the certification body, it is also essential that its employees “rise” professionally.

“It was no joke to go through the ISO certification process, it was tedious and time-consuming, but we have to rise up not only for the company but also for ourselves. We consider ISO certification to be no only a success for the company, but also for ourselves, because it means that we improve our professionalism, our work ethic and our self-discipline,” Erguerro said.

All of these successes Aldwin humbly attributes to teamwork and employee dedication for which he is deeply grateful.

Growing a business is always about making the right change