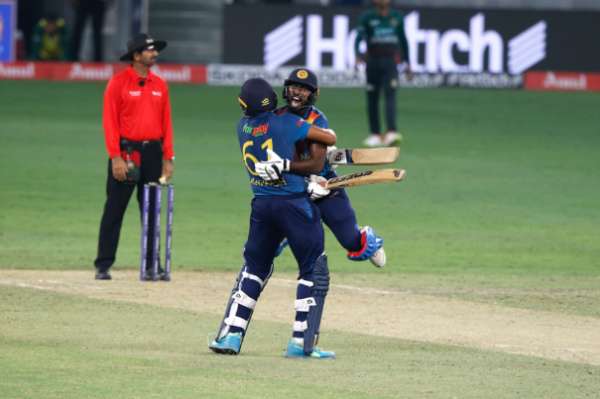 
By Shanuka Aravinda reporting from Dubai

Sri Lanka edged Bangladesh in a tense final to advance to the Asian Cup Super 4 leg at Dubai International Stadium on Thursday, winning with two wickets and four balls to spare.

Kusal Mendis took advantage of his chance, dropped five times by Bangladesh, on track for his seventh half-century T20I and a best score of 60, with Sri Lankan captain Dasun Shanaka hitting 45 of 33 balls to keep his in the game.

Shanaka’s wicket in the 18th, when Sri Lanka needed 26 balls from 13, seemed to put Bangladesh ahead of the game, although Chamika Karunaratne brought that equation down to 13 for 8 before running out for 16.

Fast thrower Asitha Fernando then broke a boundary on the last ball of the 19th, reducing the equation to eight runs on six balls, before another boundary from Fernando on the second ball of the final over left Sri Lanka requiring three points on four deliveries.

Fernando led them to the next delivery too long to even the scores, before the third referee indicated that Mahedi Hasan had overstepped, effectively handing Sri Lanka victory.

This lack of ball was one of four played by the Bangladeshis, who conceded a total of 17 extras.

One of those no-balls also gave Mendis a reprieve, when he was caught on the 29th, with replays confirming Hasan had gone over the target.

Sri Lanka looted 44 in five overs early in their innings, with Mendis scoring two sixes and a four over Shakib Al Hasan in the fifth over.

Bangladesh would finish the Powerplay slightly ahead, however, with debutant Ebadot Hossain taking the wickets of Pathum Nissanka and Charith Asalanka in sixth place.

At the end of the tenth, Sri Lanka were barely keeping abreast, losing Danushka Gunathilaka and Bhanuka Rajapaksa cheaply, even as Mendis continued to ride their luck.

A 54-run tie between Mendis and Shanaka took Sri Lanka to 131 for 4 after 14.2 overs, before the former picked the outfielder to third man, dismissed for 60.

Wanindu Hasaranga was taken for 2, leaving Shanaka as Sri Lanka’s best hope for victory, and the captain searched for him, until he was taken deep for 45.

Mehidy Hasan gave Bangladesh a quick start, with 38 from 26 deliveries, before Afif Hossain scored a brisk 39 from 22 balls to help his side finish on 183 for 7 from 20 overs – their highest ever tally in the United Arab Emirates.

Hasan had two sixes and three fours inside the Powerplay – his 38 making up the vast majority of the 55 runs Bangladesh had in the first six overs.

Sri Lanka’s only success in this stretch of play came in the third over, when Asitha Fernando had fly-half Sabbir Rahman caught for 5.

Wanindu Hasaranga struck in his first innings when he pulled out the dangerous Hasan immediately after the Powerplay, with Chamilka Karunaratne representing the key wicket for Mushfiqur Rahim in the following innings, caught behind for 4 and Bangladesh on 63 for 3.

Shakib Al Hasan plundered 9 of the first 15 deliveries he faced, before breaking three boundaries in four balls, to raise the bar.

He was, however, knocked down by Maheesh Theekshana soon after, moving to the leg side to make room, only to miss the ball completely and cause his stumps to shake.

Afif Hossain and Mahmadullah then put together Bangladesh’s best partnership of the game, scoring 57 from 37 balls – each taking a six and a four from two overs from Hasaranga.

Afif Hossain was dismissed in the 17th and Mahmadullah in the 18th, but Bangladesh didn’t back down, Mosaddek Hossain crossing four boundaries to finish unbeaten on 24 from 9 balls.