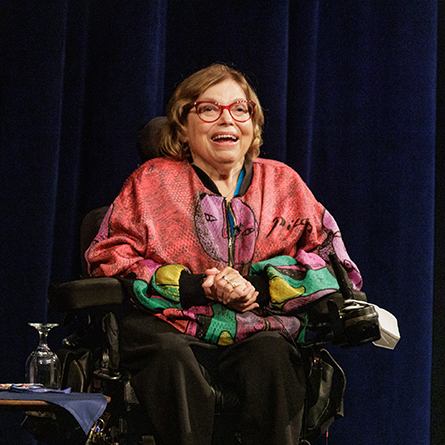 Paralyzed by polio at the age of 18 months, disability rights activist Judith Heumann never wished she was disabled.

“My life has been that of a disabled person. I never really wanted to think of my life as anything other than who I am,” Heumann told more than 800 students, faculty, staff and residents of Greater New London this year. One Book One Region signing event at Connecticut College on Thursday.

Instead, she focused on what she could change.

“For me, it’s about what needs to change in society? Why has society been constructed in such a way as to deny the contributions of people who have various forms of disability? I’ve always thought it was important to look at what changes need to be made and what can be made,” she said.

“It’s about asking what we need to do to make sure people are included and not setting up something where our big wish and hope is ‘heal me’.”

Memoirs of Heumann, Being Heumann: Unrepentant Memory of a Disability Rights Activistwas the 2022 selection for One Book One Region, in which Conn freshmen do shared summer reading with faculty, staff, counselors, and hundreds of community members in Southeast Connecticut.

The book offers a first-hand account of the disability rights movement of the 1960s, 1970s and 1980s. As a child, Heumann struggled to attend primary school after being described as a “fire hazard” , and later won a lawsuit against the New York school system for denying her a teacher’s license because of her paralysis, which set a precedent that fundamentally improved the rights of people with disabilities.

A lifelong activist, Heumann was instrumental in the development and implementation of key laws, such as Section 504, the Individuals with Disabilities Education Act; the Americans with Disabilities Act; the Rehabilitation Act; and the United Nations Convention on the Rights of Persons with Disabilities. She has received numerous awards and was the first recipient of the Henry B. Betts Award for her efforts to significantly improve the quality of life for people with disabilities.

In her opening remarks, Dean of the Faculty Danielle Egan said Heumann had dedicated her life to creating wider circles of understanding by fighting for the civil rights of people with disabilities and for conditions in which everyone can thrive. .

Being HeumannEgan said, “tells the whole story: a story of injustices, many acts of resistance and many acts of love, and ultimately the landmark victories of the disability rights movement that she helped catalyze. But what is perhaps most memorable about this book is the inspiring lesson it offers all of us about life – about being present, open, curious and alive with each other. And to see what is possible when you recognize yourself and allow yourself to be fully human.

The event, which marked the 20th anniversary of One Book One Region of Eastern Connecticut, featured a wide-ranging discussion between Heumann and associate professor of sociology Jennifer Rudolph, a specialist in Latin American studies and disability studies. This semester, Rudolph is teaching a course on “Disability and Society,” and in June she kicked off the One Book One Region 2022 program with a compelling talk about her own work in disability justice.

Maeve Bettencourt ’26 said meeting Heumann gave her a better understanding of the issues she and her classmates studied in Wetmur’s class.

“His answers were really thoughtful, and it really made it clear that while we’ve come a long way, there’s still a lot of work to do,” Bettencourt said.

Heumann said the key to progress is collaboration.

“We all need to think about what we need to do within our communities to bring about change, so that we can feel with greater confidence that people are not being left behind.”