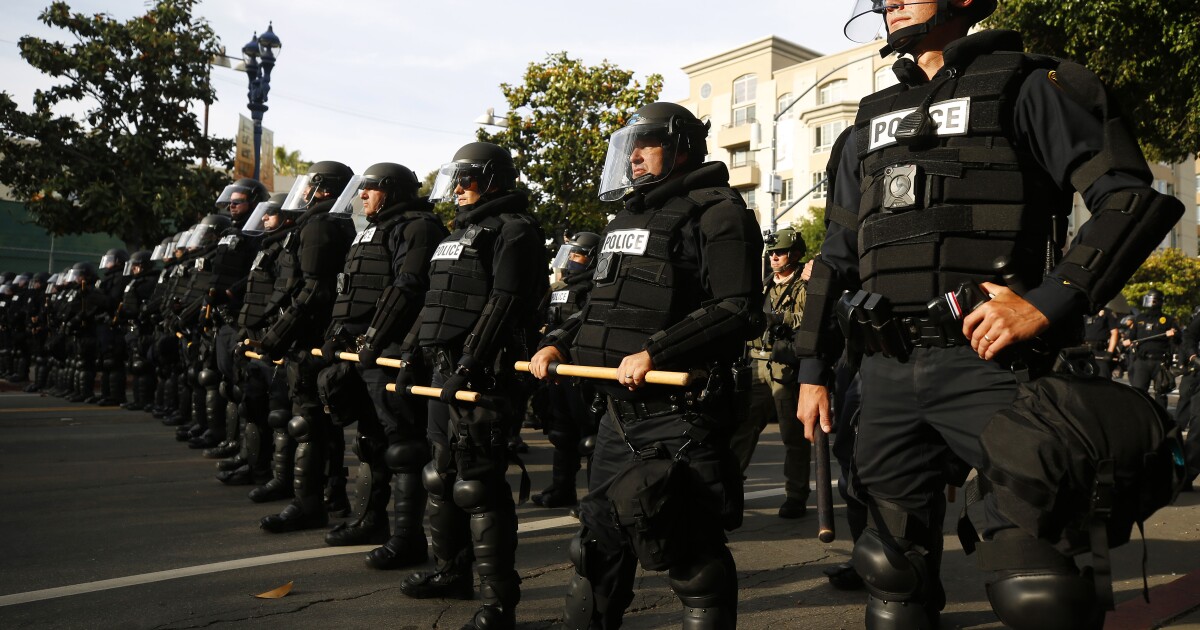 A relatively new San Diego police unit is taking a closer look at instances where officers use force – a task officials hope will lead to better training and less force overall when officers interact with them. community members.

The Force Analysis Unit comes at a time of closer examination of the use of force by officers, which, according to several recent police studies, has a disproportionate impact on black and brown communities of San Diego. Force includes such actions as pointing a gun at someone, deploying pepper spray or a stun gun, using a baton, or apprehending someone by force.

At local and national levels, police reform advocates have called for better record keeping and greater transparency regarding the use of force by law enforcement. In May, the National The Council’s Criminal Justice Police Working Group, a political group that seeks to identify ways to reduce violent encounters between police and the public, highlighted gaps in how data on the use of police strength are collected and shared.

“Understanding the contours, triggers and contexts surrounding police use of force and its racially disparate impacts are two urgent areas that require more and better data,” the the working group said. “Equally important, the democratization of this data is essential to strengthen accountability and restore confidence in the police. “

Although San Diego Police officials said it was too early to discuss trends or findings – the unit’s work began in May – they said much could be learned from one systematic review of force.

“We look at every use of force incident,” said Lt. Kevin Mayer, who oversees the Force Analysis Unit. “Our ultimate goal is to reduce force encounters.”

Unlike the department’s internal affairs department, which investigates encounters involving the use of force by police and searches for potential policy violations, the new unit will review incidents with a view to improving use of force training.

This process will involve reviewing officers’ reports and any relevant video footage worn on the body. The group will also monitor internal data on the use of force in the event that trends emerge that warrant further examination.

If, for example, department agents are involved in more shootings in which they fire bean bullets for a certain period of time, the unit will look into the reasons for the increase, Sgt. said Elias Estrada.

The unit will also monitor and analyze what police refer to as “show of force” – instances where officers are willing to use force, but fail to do so. This could include pointing a Taser at someone without pulling it, or having a police dog close at hand, but not letting it go. Pointing a gun at someone, even if not fired, is considered a use of force.

Requiring officers to report a show of force is new to the department. Officials say collecting this kind of data will help them determine whether these kinds of tactics are helping to defuse situations. Currently, the ministry views show of force as a de-escalation tactic under certain circumstances. If the “mere presence of a Taser” helps an officer avoid the use of force, “it would be a success,” Estrada said.

Community members objected to the notion, saying even displaying a less lethal weapon like shotguns or Tasers could make the situation worse.

The unit reports to the department’s training division, which is expected to streamline efforts to improve officer training, Estrada said.

Jack Schaeffer, president of the San Diego Police Officers’ Association, said he believed the efforts of the new unit would provide better insight into “what works (and) what doesn’t.”

“If we can always adjust our training, it only benefits our cops and our citizens,” he said.

Brandon Hilpert, chairman of the San Diego Commission on Policing Practices, an oversight group that examines complaints of police misconduct, said he believed the Force Analysis Unit “would give us more power to (improve) the way law enforcement interacts with the community “.

Hilpert said the department should also share details of the unit’s findings with the public.

“Collecting the data is one thing, but if nobody sees it, it’s another,” Hilpert said. “It makes it harder for the public to believe the ministry. ”

Groups like the Policing Task Force echoed these sentiments, saying that “accessible and reliable data on the performance and impacts of law enforcement is essential to reform efforts.” The task force called on law enforcement to make the data available to police reform advocates and researchers through interactive online platforms.

While the San Diego unit will attempt to track and analyze force like it has never done before, the department has been collecting detailed use of force information for years.

According to a use of force database maintained by the department, San Diego police officers used more than 38,000 actions of force in more than 16,000 separate incidents from September 2016 to April 2021, according to a San Diego review. Union-Tribune.

Officers identified the race of the person they used force against 90 percent of the time. More than a quarter of the time, the subject was black, even though black residents make up only 6% of the city’s population.

Officers sometimes use more than one type of force against the same person or against more than one person in a single incident. About 46 percent of officers reported using two or more force actions during an incident. Less than 1 percent said they used five or more.

These results are consistent with several studies of San Diego police stopovers in recent years.

More recently, a report from the Center for Policing Equity, a national nonprofit that uses data to help law enforcement agencies identify and eliminate stigma, found that black people were nearly five times more likely to be subjected to force as whites even after counting. for factors like poverty and crime rates.

“When racial disparities are present even when the influence of these factors at the neighborhood level is removed from the equation, this suggests that agent behavior, or departmental policy or practices, are likely to play a role.” , says the report, published in June. .

The San Diego Police Database tracks factors such as the type of force officers use most often, the age, and the type of resistance people display when encountering police.

More than a third of the actions were used against people between the ages of 20 and 29, but officers also used over 1,400 actions of force on children and adolescents between the ages of 1 and 17.. A spokesperson for the department said some entries involving children, especially very young children, could be the result of a data entry error.

About 55 percent of the time, officers reported that people were actively resisting when force was used. Most of the force actions, 84 percent, did not result in injury, according to the officers’ reports.

The force was used most often in the East Village area, followed by Pacific Beach and Gaslamp Quarter.