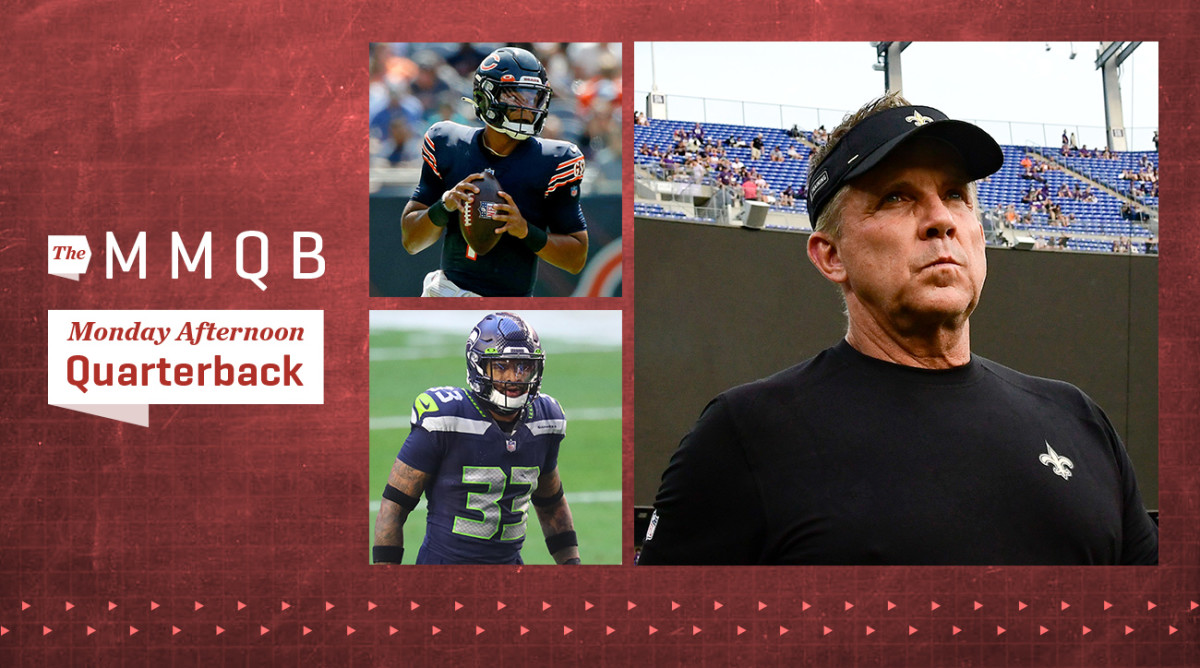 A full week of pre-season games is behind us, I’m back on the road and the season is approaching …

• Sean Payton’s mood the other night grabbed the headlines — he told the media he didn’t really feel like talking about quarterbacks after a six-figure collapse in the first preseason game. of the Saints against Baltimore. But really, his reaction should say a lot to anyone following the competition. I spoke with Payton a few times about the Jameis Winston / Taysom Hill dynamic during the offseason, and I remember his reluctance to put non-negotiable elements on what he would need from his quarterback, because “what if neither of them have you?” He finally dove into what he considered important. “The most important thing is to lead this team, to lead the offensive in scores, to protect football and to score,” he said. There are some commandments that we think are really important. They both showed great leadership, they both were very selfless, it’s been a really good play here for a while, even at the time when Teddy [Bridgewater] was in the room. The rest will take care of itself. Obviously it’s up to us to give these guys the best things they can perform and allow them to play. But yes, this is the approach we are taking. So we can judge them by this standard quite easily.

Hill played the first three series of the game. The offense returned the ball to the top two, with Hill counting for one on an interception. He also took a 12-yard sack to complete the third practice on a third and 12 from the Ravens 40, which wasn’t ideal. On the bright side, the Saints tallied five first downs and converted four third downs while Hill was in place.

Winston played the next five – with two ending in touchdowns, two more ending in turnovers (one of which was a Winston pick) and one in a three-and-out. Winston led twins for seven plays and 80 yards in the second quarter and threw a touchdown pass to Lil’Jordan Humphrey during the two-minute drill.

So even though Payton wanted to wait until Saturday night, it’s fair to say that this round went to Winston. Which isn’t exactly a reason for the former top pick to feel comfortable, depending on what his coach thought of it all afterward.

• In the aftermath of the weekend, many of the team I spoke to spoke about how their rivals might regret letting down Justin Fields in April. It’s early, sure, but what attracted a few scouts I touched base with was how comfortable Fields looked with Matt Nagy’s offense. And I don’t think that comes as a surprise to the Bears guys, based on what they’ve seen so far. Then there’s the importance of the preseason games for Fields from the start, which was reflected when I asked Nagy a few weeks ago if he would be okay. putting Fields in a regular season game, depending on where he was. “We are working on this right now,” he said. “This is what we really want to see from now until this first week: Is he ready? Then, What’s the scenario? Because each team is a little different. But I really believe him – he’s going to give it his all, he cares so much. I will use the word “prepared” again. He will always be prepared and he has talent. So there were a lot of quarterbacks who were able to come into their rookie year and get things done. And each situation, the teams build themselves a little different from each other, they all had their own situations and scenarios. So the ultimate goal is to prepare it as soon as possible. But we need to be able to see more. At that point, I told Nagy that Fields’ job was to make Nagy’s decision difficult, right? “Yes,” Nagy replied, “And I told him so.”

“If you do this, control it, nothing else matters,” he continued. “But yeah, man, make it tough. All [the quarterbacks]-make it difficult. “

• While on the Bears, I’ve been meaning to write this since I was at the Bears camp three weeks ago: The players are thrilled with Sean Desai’s promotion to Defensive Coordinator. The 38-year-old spent his eight NFL seasons with the team, so he has an ongoing relationship with much of the dressing room and his energy has rubbed off on the entire squad. Additionally, a return to a pure version of Vic Fangio’s defense, the pattern that made Chicago so formidable on defense in 2018, has been hailed by vets in the room.

• I will probably do more with the topic “What can you really do with preseason games?” Next week, but I’ve been asking about it for the last few days, and an interesting premise has come out: Second-half sacks can mean next to nothing. The reason why? Because the depth of the offensive line is really shallow throughout the NFL, so the passer who cram those sacks after halftime probably aren’t doing as much as you might think. So temper your excitement for this sixth-round passer who looked great in the third quarter last weekend.

• Related: While strolling through the trading market, the offensive line always seems to be the most sought after position. This means that if you have a good spare lineman or two, you might be able to get a good return for them.

• Washington Terror Borders Chase Young put Patriots left tackle Isaiah Wynn in a body bag last Thursday, and seeing him get to Cam Newton as quickly as he did should only illustrate what the defensive line is. of the WFT, filled with first-round picks at all four places, should be able to make it in the fall. And here’s another reason they feel good where they are: Improved depth at the corner with the addition of veteran William Jackson and rookie Benjamin St. Just added to the mix has the coaches believing they’ll be able to. play more man blanket. Which should only allow them to be more aggressive up front. Which, of course, could be a very bad deal for the offenses they face.

• Jamal Adams ‘situation in Seattle was absolutely part of the equation in the Jets’ decision to trade their star safety last summer. They knew, beyond the fact that Adams was unhappy with his situation there, that it was going to be very, very difficult to re-sign. And the Seahawks are now a bit stuck in a Catch-22, having given up a pair of first-round picks to get it without going into overtime first. And if you want to get a feel for how this sort of thing can be leveraged, take a look at what the Texans ended up paying Laremy Tunsil and what the Rams gave Jalen Ramsey.

• An impending business for the teams: deciding how to use the remaining preseason games. In the past, they regularly used Game 3 as a regular season dress rehearsal / tune-up, and Game 4 as a last chance to watch all the guys at the bottom of the list. But this year, with the fourth game cut, that script needs to be rewritten. Some might use this week’s game as a dress rehearsal, although that leaves a three-week gap before the first games. Some will keep it in the third game, at the cost of a little more evaluation of the bottom of the roster. Ultimately, there’s a downside to either, and that’s why teams that have joint workouts over the next couple of weeks are likely to have a better chance of handling things.

• Tim Tebow not making special teams is not a good sign for his viability to stay in the Jaguars roster. If he doesn’t, it’ll be interesting to see if they put him on the practice squad. In general, 33 years old is too old for a player to be a development project, which is what these training places are usually for.

• The Lions’ game against the Bills on Friday night was instructive on how teams typically use preseason games in different ways. New coach Dan Campbell got some shit for his time management. Down two, the Lions were second and -10 at Buffalo 15 with 1:49 remaining. Campbell and OC Anthony Lynn called two assists. On the second down, receiver Javon McKinley ran out of bounds to stop the clock at 1:46. The third down was a failure by David Blough. So Randy Bullock trotted for a 28 yard field goal, 1:38 left and the Bills led for the winning field goal. And if it was a regular season game, it would have been professional misconduct by Campbell and Lynn. But in this context? Campbell saw a shot to assess Blough in a red zone and take a look at his two-minute defense. Which makes sense, of course, given that he’s still learning the team. So, yeah, everyone uses the preseason in a different way. But winning the real games is never really important.

• How cancer helped Ron Rivera find his voice
• Problems with the Deshaun Watson investigation of the NFL
• Setting up the NFL’s hottest offense is harder than you might think
• Josh Allen contract: strong for the player but also friendly for the team