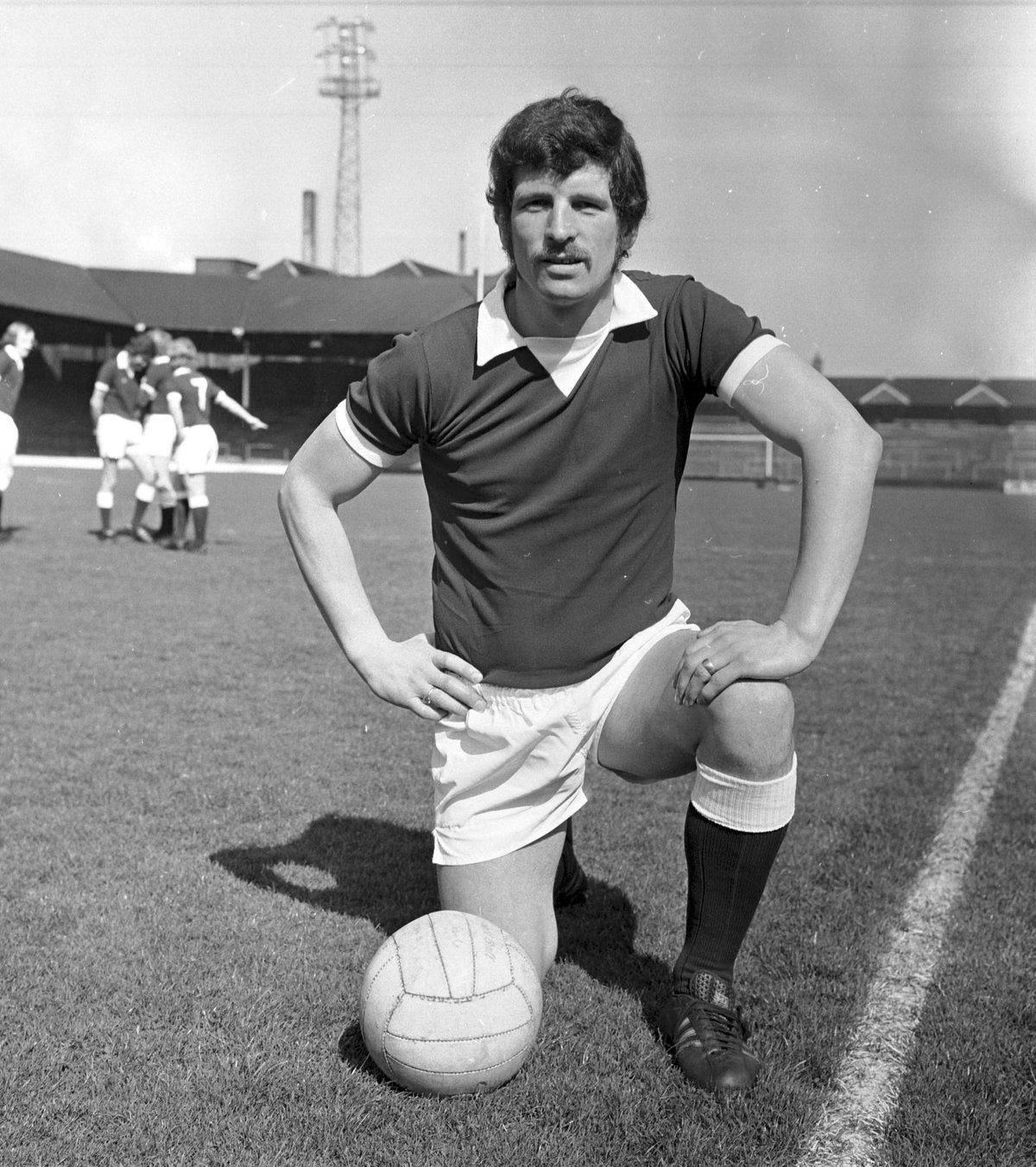 Drew Busby was a well-known Scottish footballer who was a fan favorite at all the clubs he represented, especially at Hearts, the team he is most associated with and where he was affectionately nicknamed ‘Buzz Bomb’. The nickname referred to the style of play with which he led the front line – unreserved, tenacious and uncompromising. Add his goalscoring ability to the equation and it was easy to understand his popularity with the fans. He also had a knack for forming famous hitting partnerships with his teammates – first at Airdrie with Drew Jarvie, then at Hearts with Donald Ford and later Willie Gibson – which bolstered his reputation.

In a long career that started with the late Third Lanark before moving on to Partick Thistle, Airdrie, Hearts, Toronto Blizzard, Morton and Queen of the South, he played in over 550 games, scoring over 150 goals. While silky football wasn’t Drew’s forte, his contribution to the team’s performance was top-notch and consistent. Unlike his personality on the pitch, off the pitch he was very different, a gentle, caring and generous spirit always caring for others rather than himself and devoid of ego.

Register to our daily newsletter

Once retired from football, he enjoyed a successful career in the licensed business, operating the Waverley Bar in Dumbarton since 1988 as a popular and much-loved ‘host of the mine’.

Andrew Douglass Busby was born in Glasgow to John and Mary and grew up with his siblings in Tulliechewan in the Leven Valley near Alexandria. Father Andrew was an engineer’s assistant who died when Drew was eight. Drew attended Levenvale Primary before joining Vale of Leven Academy where he started to make his mark in football. While in college, he wrote to Coventry City, then under Jimmy Hill, asking for a trial and was signed after a good performance. He scored a few goals for the youth team before homesickness set in and a homecoming loomed.

After being spotted playing amateur football for Dumbarton United, he was signed in February 1967 by Third Lanark, once a thriving club but then going through difficult times. He played 11 games and scored his last goal in senior football, against Dumbarton in April 1967, shortly before Thirds’ demise.

Still harboring hopes of a career in the game, he once played for Partick Thistle before joining Vale of Leven Juniors for three seasons, with the team sweeping everything before them in Drew’s final season when he scored a record 57 goals.

His senior career took off properly in June 1970 when he signed for Airdrie, then a top side, where his partnership with future international Drew Jarvie paid off immediately after each scored 24 goals in their debut season. together as they reached the Scottish Cup semi-final. final, Celtic need two games to defeat them.

The following season Airdrie reached the final of the Texaco Cup, a cross-border competition, narrowly losing to Derby County over two legs, having previously knocked out Manchester City, Huddersfield Town and Ballymena United, with Drew scoring in each of those encounters .

Following relegation the following season, Hearts stepped in to sign Drew in May 1973 for a club-record fee of £35,000 in what would be a significant career move. Although he only spent three seasons at Airdrie, his contribution was later recognized with the club’s Hall of Fame induction and at his funeral a message from Drew Jarvie recalled how their “partnership complemented each other and Drew’s power and determination helped me look good.”

For six years at Tynecastle, while winning no silverware, Drew played arguably his best football and firmly entrenched himself in the affections of fans, as evidenced by his subsequent induction into the Hall of Fame. club. He played 256 competitive games, scoring 84 goals, appeared in three Scottish Cup semi-finals, two League Cup semi-finals and the 1976 Scottish Cup final, won by the Rangers. In addition, he scored the only goal of the encounter when Hearts beat Everton in the Texaco Cup in 1974 and also scored in the famous European Cup Winners’ Cup at Lokomotive Leipzig in 1977. Relegation this season was followed by immediate promotion but in 1979 the club was again relegated, leading to Drew joining the Toronto Blizzard in the North American Football League for two seasons, after which he played for Morton for another two seasons before ending his career as a player/manager at Queen of the South, retiring in 1984.

While working at Burrough’s accounting machine factory in Dumbarton as an assembler before his footballing career took off, Drew began dating colleague Annette Hunter. They were married in July 1969 at Dumbarton Baptist Church and had a long and happy marriage during which they had Alan and Gail. Initially they settled in Dumbarton before moving to Alexandria, where they remained.

After football, Drew entered the licensed business, first at Red Row Bar, Renton, then acquiring Waverley Bar in Dumbarton, which he managed until recently. An excellent publican, he was held in very high esteem by customers and staff, as evidenced by the many warm tributes on social networks. Helpful, generous and welcoming to all, Drew has created a friendly and safe community atmosphere in his bar which has underpinned his success.

Family was first and foremost for him. He was a devoted grandfather to Lauchie, Lewis and Lyle and warmly supported his family in every way. Besides family and football, interests included keeping fit, golf and hiking, completing the ascent of various Munros. He is survived by his wife, children and grandchildren.

If you would like to submit an obituary (800-1000 words preferably, with jpeg image), or have a topic suggestion, contact [email protected]

Obituary: Drew Busby, striker who was an Airdrie and Hearts fan favorite