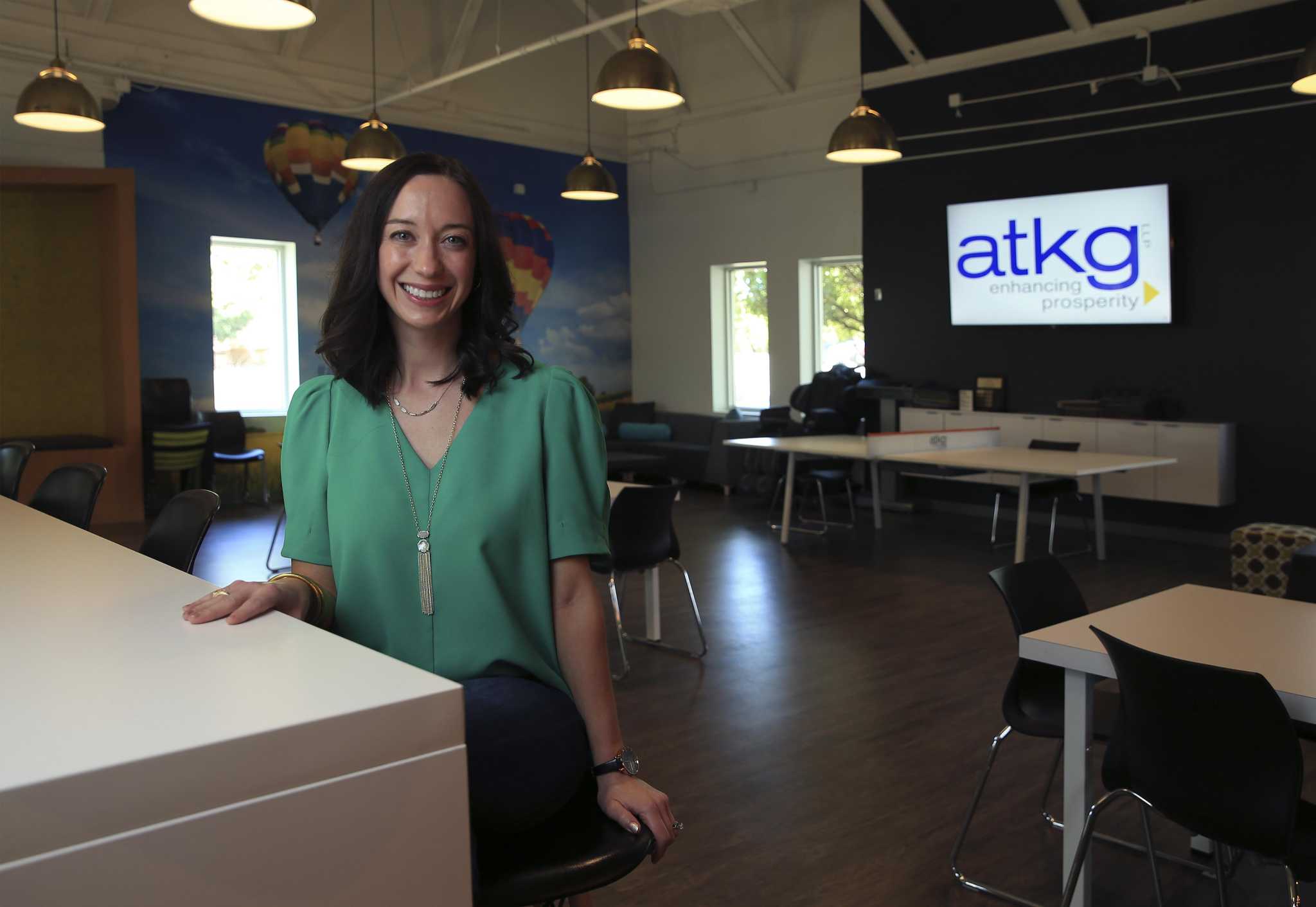 The offices of ATKG, an accounting firm on the Northeast Side, appear to have been designed with the aim of showing that happiness can be found in the world of invoices and spreadsheets, 1040 and 990 and W2.

The walls are decorated with murals of sea turtles and hot air balloons. The common area has a ping-pong table, popcorn machine, and beer tap for after-work reunions. The company is renovating its oak-shaded backyard, adding a fire pit and a putting green.

“We just think a relaxed atmosphere is going to keep everyone happy,” said Allison Miller, one of the firm’s eight partners. “We’re not stuffy, in suits and ties with the green visor, or at a calculator all day. This is not what we want to be.

Along a hallway, there are framed photographs of employees reaching their “bucket list” goals – like seeing Hamilton on Broadway or drinking a nice bottle of Bordeaux – thanks to the company’s tradition of shooting. comes out with cash prizes of up to $ 2,500 to help them. .

Unlike many accounting firms, ATKG maintains a small list of around 140 clients which it can serve in close collaboration with its staff of 61 employees. It focuses on smallholding companies in sectors such as animal husbandry, real estate, and oil and gas.

Miller comes from a family of accountants. His parents and uncle own a business in Laredo that his grandfather founded after befriending a CPA while serving in World War II. She worked in the family business while growing up and went on to earn her bachelor’s and master’s degrees in accounting from Texas A&M University.

After practicing for nine years at the national accounting firm EY, Miller joined ATKG in 2017 in search of a place to work that would allow him to spend more time with his family, including his now six-year-old son. . In large companies, accountants often work 80 to 90 hours per week during the busiest times of tax season, she said.

“I was just working a lot of hours, and I knew I couldn’t be the mom I wanted to have a schedule like that,” she said.

Miller was recently interviewed to discuss work-life balance, federal tax law, and the importance of having family conversations about financial matters. The following has been edited for brevity and clarity.

Question: With all the accountants in your family, did you always know that you were going to enter the profession?

A: The funny thing is, I remember thinking when I was younger that I didn’t want to do what my parents were doing. I guess maybe a lot of teenagers feel like this – “I don’t want to be like my parents.”

At the time, I was working in their office. When I took my first accounting class in college, I remember calling my mom and saying, “Well, I liked that. So, I guess I’ll be majoring in accounting. And that was it. If I could redo it, I would. I think it’s in my blood, and I like it.

Question: Other than a talent for numbers, what other skills should an accountant have?

A: Being able to talk to people. We are on the phone with clients all the time. Being able to pick up a phone and have a face to face conversation on technical matters is really important.

I would also say love of learning. Laws always change. I feel like every year has been busy, but when the pandemic hit it was just a massive series of pieces of legislation that had many tax implications. We always joke, “Well, maybe next year will be a slow year. But that’s never the case. There is always something big going on in the tax world, so you have to constantly learn what the new laws are.

Question: What prompted you to come to ATKG?

A: It was really fetching more time at home, or when I was at home, not on my computer.

I also felt like I was getting really good at doing a lot of tax returns in a short period of time. I didn’t feel like I was growing up as an advisor, which I ultimately wanted to be. This is one of the things that sets our firm apart, is that we have a very selective client strategy. We only have about 140 customers, while most businesses our size have thousands. And we do it intentionally, so that we can spend a lot of time developing relationships with each client, doing a lot of work for them. We’re not a tax filing factory where you drop off your stuff before April 15th and then, “I’ll talk to you next year.”

Question: On the firm’s website, I counted that 45 of the 61 team members are women, including five of the eight partners.

A: That’s one of the things that attracted me to the firm, that there were five partners and three women. We’ve added three more since then, and two of them were women. We’re all working parents, and I think that sets a really good tone in the office.

It shows that you can have your cake and eat it too. You can flourish in your career and flourish with your family. We have a lot of working moms. I think they can stay here and work and be a mom because we don’t need crazy hours. We respect your time at home. We’re not going to call you at night to tell you to reconnect.

Question: As an industry, is accounting considered to be friendly towards women? Do you know what the male to female ratio is?

A: At the time, it was absolutely more masculine. I know because my mom, when she took her first accounting class at (University of Texas at Austin) in the 1970s, she vividly remembers sitting in one of those big rooms. class, and the teacher said he didn’t understand why the women were in that class, that they belonged to secretarial classes.

Question: You are the director of the federal tax group. I imagine tax policy changes a lot between presidential administrations.

A: It does, and even within the same administration it can change a lot.

Effective January 1, 2020 – just before the pandemic hit – we have decided to split up and designate groups for federal tax, state and local tax, estate tax, and international tax. We decided to have people in charge of these groups, because there are always so many changes. It didn’t make sense, in our mind, for everyone to try to digest new legislation and learn it for themselves. It made more sense for a few people to really dive in and learn it well.

We have fairly specialized clients. We like closed businesses. We have a lot of restaurants, ranches, oil and gas. When we look at these new elements of the tax code, we look at what is really important to our customers. So that’s what these groups do.

Question: How to find out about changes in tax legislation? Are you really going to read the laws?

I led our PPP team. Every morning I went to the website (US Small Business Administration). I would see what new rules they were posting at midnight because, I swear, they were posting new FAQs at midnight every week. And I was going to Congress.gov, I found the bill, I read the provisions.

I don’t know if you remember that, or if you’re aware of all the changes PPP has had on the community, but it was just crazy. The rules were quite vague and were constantly changing. So it was just about reading and reading and reading and then trying to interpret that and share it with the office, share it with our clients. We had clients who were from these very large national banks and we couldn’t reach anyone. So we help put them in touch with bankers we knew and trusted to help them get those loans. It was madness.

Question: I saw on your website that you are helping families have difficult conversations about their businesses. What types of conversations?

A: What we sometimes see is that you have one of the kids who works in the company, and not his brother. And I’ve seen it happen where mom and dad are going to leave the family business to the kid who works in the business. And with the other kid, “Well, we’re going to give them the lake house.” And that might not be fair, right? It may not be intentional. It’s just that they didn’t think about it. And that can lead to family drama.

Sometimes mom and dad have done a lot of estate planning, have a lot of different vehicles that they’re going to use for succession planning, a trust or a family partnership or something like that. And the kids, who might be adults, don’t even know what it is. They don’t know what there is.

These types of conversations, they can be really nice and easy, or they can be really difficult. It just depends. We feel well placed to discuss uncomfortable situations. They never want to talk about it, because when families talk about money and things like that, it can make them uncomfortable. We try to use this to our advantage as a CPA – we don’t mind being the bad guy who brings this up.