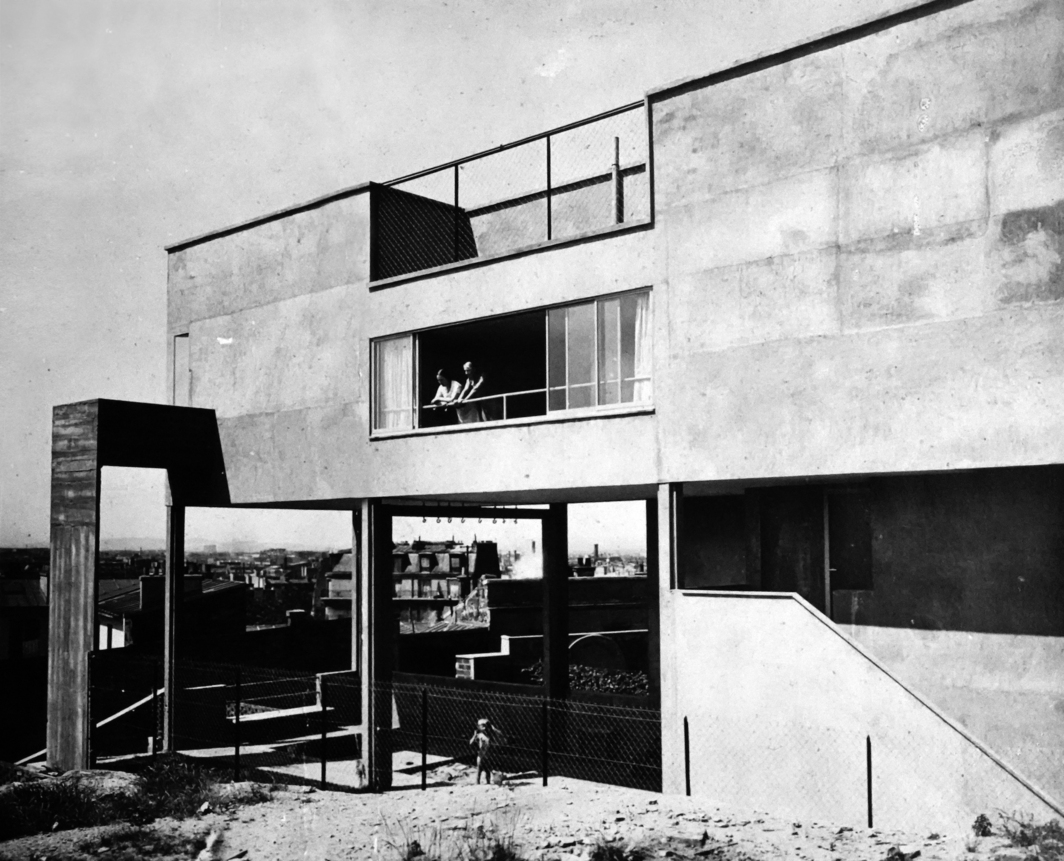 WHEN IT COMES TO UR-STORY of modernist architecture, we all pretty much know the first few lines by heart. At first there was nothing; the Earth was empty, and without Corb; then Sullivan said “Let Wright be”, and Loos and behold, Behrens begat Gropius begat Mies – or something like that. Even other sublimated ancestors (the “zones of silence”, as the critic Reyner Banham once called them) long omitted from the tall tales of modernism have now largely become part of the general conversation. The whole subject seems to have been thoroughly mined, and it seems unlikely that there is anything left to unearth.

Unless there are. Signal The lost architecture of Jean Welz, an engaging but rather eccentric biography of filmmaker and scholar Peter Wyeth. While Welz’s name (and Wyeth’s, for that matter) would ring few bells in architectural circles today, the man never seemed too eager to make himself known: born Johann, called Hans in his youth, Austrian Welz said he had a “French soul”, becoming Jean in his twenties. He died, aged seventy-five, in South Africa, having largely abandoned his practice of architecture years earlier, with only a handful of projects completed under his own changed name. Small in scale and in numbers, Weltz’s portfolio of primarily residential projects is characterized by a quiet, rigorous aesthetic, as if the artwork itself is as eager to avoid notice as its creator. And yet, as Wyeth argues, “Jean Welz’s success as an architect was no mere aside” – and his obscurity was not entirely of his own making. “In more ways than one. . . the architecture of Jean Welz has (been) gone,” writes Wyeth, leaving the provocative parenthesis hanging in the air.

Step by step, Wyeth proceeds to piece together a dossier proving Welz’s importance as well as his willful marginalization, turning the entire book into something of a reputational murder mystery. The author first discovered his subject when he stumbled upon the Maison Zilveli, a striking modernist house in the 19th arrondissement of Paris, its unassuming facade giving way to a bold concrete slab perched on stilts and advancing on a view of the Eiffel Tower. Despite or perhaps because of its rather miserable state of disrepair (“a bit Miss Havisham”, writes Wyeth), the building piqued the researcher’s interest, especially as he discovered that there was so little documentation on its creation. Tracing the identity of the designer and his life story would prove to be a years-long effort, a paper hunt across several continents and into very deep professional and personal weeds.

It turned out that the architect was hiding in plain sight. Johann Friedrich Welz was born in Salzburg in 1900 into a wealthy family with connections in business and art. A cabinetmaker uncle spotted young Welz’s precocious talent and encouraged him to pursue a career in design. Beginning his studies at the School of Arts and Crafts in Vienna, the budding architect found himself drawn to the circle around Adolf Loos – his first contact with the nascent modernist wave – but eventually found employment with the more conservative (but only slightly less prominent) Josef Hoffman. When the latter sent him to Paris to attend the 1925 International Exhibition of Modern Decorative and Industrial Arts, Welz found himself so comfortable abroad that he never left, instead settling as a modernist without license in a city already dominated by another naturalized Frenchman, this one from Switzerland. “Confronted with Le Corbusier,” asks Wyeth, “how would he fare?”

Pretty good, the answer seems to be, but maybe not as good as Wyeth would like to believe. The whole of Welz’s contribution to early French modernism consists of a pair of buildings mostly in and around Paris, mostly completed on behalf of other older architects, and all made before Welz left for Cape Town Western in 1936. As evidenced by the Zilveli house, the work is lean, with a limited material palette and a frank, almost brusque treatment of detail, softened (at least in the biographer’s appreciation) by a lush sense of space and procession. Although Welz’s major role in little-known but notable modern houses like the stately Villa Darmstadter and the lyrical Maison Dubin seems pretty well established, the biographer sometimes strives to bring his man closer to the center of the action: Welz was without no doubt involved to some degree with the Tristan Tzara de Loos house in Montmartre. But does the ligature of a single “R,” supposedly in Welz’s handwriting, in one of the final shots really tell us much about the scope or significance of his contribution? Welz played a vital role in the office of Raymond Fischer, a prolific but essentially managerial practitioner in interwar Paris. But since the lead architect was generally candid about his young partner’s responsibilities, should we really give Welz so much credit for projects, such as the large and logistically complex 1932 rue de Charonne apartments, on which he was only listed as a collaborator? Wyeth throws an overwhelming amount of archival evidence on the wall, but not all of it holds up.

Even acknowledging the importance of Welz’s output – he was perhaps most intriguing, the designer of the tombstone of Laura Marx, daughter of Karl – the particular canonical niche Wyeth wishes to reserve about him may or may not be the. Its putative location is right between Loos and Corb: “The great challenge for Welz”, writes Wyeth, “would be to find its own way within the context of the conflicting cultural philosophies” of its two architectural leaders. In the mind of the author, Welz succeeded by offering a Loos-inspired, free and spatially dynamic “response” to the mechanistic thought of the Swiss master, by planting the Viennese flag in the very heart of the Pays de Corb. It’s a new idea; as historian Paul Davies has written, Loos had “no followers to speak of, only those he influenced”, and it is thrilling to imagine Welz as the carrier of a forgotten, Loosian strain of modernism. But the influence of Loos (whose own legacy has so far survived the pedophilia charges brought against him in 1928) is so pervasive that it’s hard to see her as truly fringe, or Welz as her foremost exponent. It was Loos, after all, who coined one of the most famous sayings in the annals of architecture, forever linking (but not, as is often believed, equating) “ornament and crime” in his 1910 lecture with this title. Mies’ towering marble expanses bear Loos’ fingerprints all over it, and even Corb was not indifferent, according to at least one informed opinion. “Everything that is good in the work of Le Corbusier”, Loos himself is said to have said, “he learned it from Loos”.

Wyeth closes his account of the prosecutor by demonstrating how Welz eventually became an unsung hero of South African architecture – illness, lack of work and a random invitation brought him to Cape Town in 1937 – his ideas were met with eagerness by local modernists who just as quickly disowned him. his due. Buried under their work, under Corb and under the ignominy of the Nazi associations of his art dealer brother in the 1930s, Jean Welz died of tuberculosis in 1975, having spent most of his last years as a painter . The “loss” of Welz is indeed a parody of the history of architecture to which the book serves as a welcome antidote, which comes only too late for the Zilveli House, which was demolished when the author was finishing his study.

Wyeth’s lengthy first-person digressions on the building’s loss aren’t the only ones to appear in the book, which often seems as much a chronicle of its own research process as of its subject’s life. But if Wyeth exhibits the symptoms of Derrida’s “archive fever” too strongly, at least he’s in good company. No less a figure than Emil Kaufmann, one of the theorists most responsible for codifying modernist genealogy in the first place (and putting Corb at the top of it) became obsessed with, in the 1950s, by the idea that all of eighteenth-century visionary architecture, from Piranesi clair to Boullée, was attributable to an obscure Frenchman called Jean-Laurent Legeay, whose work Kaufmann had stumbled upon at the Bibliotheque Nationale. Kaufmann was probably wrong. But of these bizarre notions, a great story is made.